YOU MADE THE PLATE? 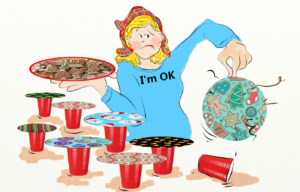 I Could Do That!

When my children were young I spent a lot of time trying to make the “Mother of the Year” list. I’m sure you know someone ranked on that very list. One of those mothers whose house is tidy, whose van is tidy and whose three exceptionally well behaved boys will dress in matching Christmas-themed sweaters without being beaten or bribed. That was the very scene when I answered the doorbell to find my tidy neighbor and her tidy boys delivering a plate of gingerbread cookies. “The cookies! I exclaimed as they entered. Look at these darling cookies! Can you believe these cookies?” I gushed. My friend smiled and added, “Oh, and I made the plate.” “You made the plate? You made the plate?”, I stuttered incredulously. In front of me were carefully arranged and meticulously decorated  gingerbread people and houses. They were iced exactly like the gingerbread images on the serving plate. Identical in every way. Our reigning Mother of the Year explained she had purchased fabric and affixed it to a clear glass plate using decoupage fluid. “It was a snap”, she said. I think most people would have thanked her, wished all a Merry Christmas, and shut the door behind them. I did, but before the door ever met the frame, I had this thought. “I could do that! I could make plates for everyone I know; the teachers and swim team coaches, the mail carrier and my co-workers.” “But wait”, I continued. One plate isn’t much. I could make plates for every season! I could use spacers between Jack-o-lantern plates and Easter egg designs, shamrocks, and pilgrims. My sisters-in-law would open the box, remove the raffia, and be so impressed. Yes, this craft would prove my mental health for the new year. The next day I bought 60 plates. Yep, 60. I had plenty of time given that it was only December 20th or so. I cut fabric into circles and soaked them while attempting to scrape the adhesive price tag off of each and every plate. I used my nursing scissors, I tried a razor blade, I used my teeth. With sticky decoupage running from my hands to my underarms, I applied and smoothed the fabric onto the bottom surface of each plate while trying to keep the opposite side clean. I balanced these plates on top of red solo cups to dry and did my best to keep two children, a cat, a dog and an angora bunny from brushing (or hacking fur) near them. After dinner, I realized the number of usable plates was dropping with each edge-trimming mishap. I used my nursing scissors. I tried a razor blade. I used my teeth. Ok. I was down to 47 plates. Later still, I abandoned a plan to hand paint and add a greeting to the back of each plate (as my neighbor had done). Instead, I grabbed a can of glossy sealant and began spraying them. I sprayed plate 16 and plate 27 and plate 35 before turning to look back. To my horror, there was some sort of chemical reaction occurring. I found myself running around the basement trying to smash down and smooth out bulbous pockets of air forming faster than I could deflate them. That is when I heard my husband’s voice from the top of the stairs. “Couldn’t you find a little project that doesn’t require quite so much swearing during the holidays?”, he dared to ask. I went to bed. The next morning I took a closer look at the what I hoped I had salvaged. In the light of day I could see that almost all of them had some strand of hair or bunny dropping or other unpalatable object sealed between the glass and the fabric. You can’t give someone a plate of cookies only to find an added surprise lacquered underneath. Never mind this project or making the list. I guess I should have tidied up better. Now then, anybody care for a for a store bought fruitcake easily opened with your teeth? P.S.  Every time I tell this story someone from the audience approaches or e-mails me to get specific directions for doing this project. What?